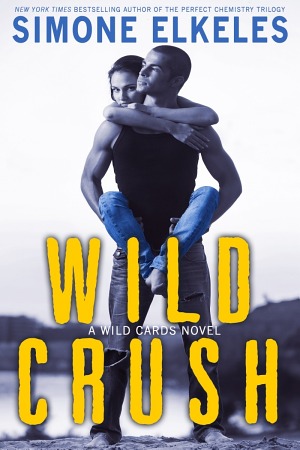 Bad boy Vic Salazar breaks all the rules except one: Don’t make a move on your best friend’s girl. It’s a Guy Code that Vic lives by. It doesn’t matter that he’s had a crush on her for years. Monika Fox is off limits.

Monika has a secret of her own and when a tragedy throws her and Vic together, the only boy she trusts is the one she shouldn’t confide in. Vic.

As Vic struggles to keep his distance, and Monika struggles with her secrets, will their wild connection violate every rule both vowed never to break—about relationships, about friendship, about love?

Why I picked it up:

I’m a big Simone Elkeles fan, and I enjoyed the first in the series, so I picked this one up shortly after its release date.

Prior to starting this I was debating whether or not to re-read Better Than Perfect, but considering that novel featured Derek and Ashtyn, and this one featured Vic and Monika, I figured it would stand on its own.

Like Better Than Perfect, this book had problems for me…

The whole “book likes girl, girl likes boy, we’ve been friends for ages” is a story line I don’t particularly like. The problem with a pre-established relationship is that the reader doesn’t get to see the two characters meet and come together as a duo. Instead the reader is thrown into the story and expected to automatically believe that something has happened before, we just didn’t get to experience it.

I had the same problem in Jennifer E Smith’s Hello, Goodbye, and Everything in Between – there was pre-existing relationship there, but because I didn’t experience the two characters falling in love, I just couldn’t believe it. The same thing happened in Wild Crush. I understood that Trey was Monika’s boyfriend and Vic was a long time friend, but it didn’t feel real to me, because I didn’t read about it happening. Instead it all felt forced and unbelievable.

Because of that, I didn’t like and couldn’t sympathise with the characters. There was a lot of whining going on and when I wasn’t annoyed with the whining, I was annoyed because I couldn’t understand where their emotions were coming from.

I’m still a big Simone Elkeles fan, but I’m starting to think that she maybe peaked with her Perfect Chemistry series.